Gayle King, editor at large of Oprah magazine, doesn’t sweat the small stuff. She suggests five little things you can do so that you won’t either.

She boils these down to: listening to happy songs, making apologies sincerely, saying positive things, being active, and quieting tempers.

Wake Up to Cheery Tunes

Listening to peppy music early in the morning can put an extra spring in your step all day long. King says she loves the song “Gonna Have a Good Day,” and the Days Inn commercial, “Here Comes the Sunshine.”

“Makes me want to run to a Days Inn,” she said. Happy music “is a very good start.” 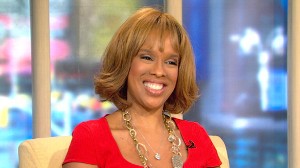 Many people hate working out, but it’s easy to garden, golf or walk for 20 minutes. And that’s all it takes to significantly reduce the risk of psychological distress, according to British researchers who reviewed the lifestyles of 20,000 Britons.

“It sounds like a cliche, but it really is true,” King said. “Something simple that gets you moving will make a big difference in how you feel.”

If You Apologize, Be Sincere

Apologies keep coming these days from Bernie Madoff, Kanye West and others. But people can sense if you’ve been pressured into it, King says. 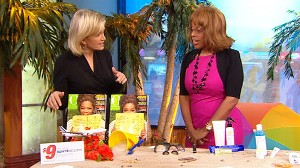 On the flip side, when you’re truly contrite, it’s very effective, as King learned recently. After being cut off on the highway, she started chasing the person down the road, honking and rolling down her window, she said. But when the lady simply said, “I’m sorry,” and looked her in the eye, King said she believed her and felt foolish for overreacting.

“Something as small as an apology can make a difference,” King said. “An apology works when you feel it is sincere.”

Positive communication goes a long way. When you want to tell someone something good and something not so good at the same time, it’s always better not to say, “this is great, but….”

“‘But’ tends to negate everything that you just said,” King explained.

Instead, use the word “and” to temper your criticism. Inflammatory words like “stupid” should be kept out of conversation altogether. The focus should be on how the action has affected you.

Finally, use the word “we” in place of “they.” This shifts others’ viewpoints and your own, says King, because “if we’re not part of the solution, then we’re part of the problem.”

“It’s a very small thing,” King said. “It implies we’re all in it together.”

It’s possible to prevent a spat from escalating into a full blown argument by following the advice of a University of Utah professor who has studied how couples argue. The three keys: Don’t raise your voice, do empathize with your partner, and don’t drag out the fight.

For more tips on small things that can make a big difference, check out the October issue of O magazine and visit Oprah.com.