Bob Barker, famed TV icon and former host of “The Price Is Right,” has given $3 million to finish funding the construction of a new hospital in Bethesda, Md., to care for the brain injuries of military personnel.

Barker, a naval aviator who served during World War II, contacted the Intrepid Fallen Heroes Fundlast week after learning that it was struggling to come up with the last $3 million for the new treatment center. 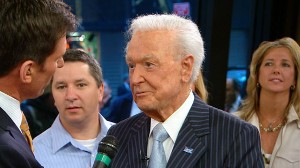 Bill White, president of the Intrepid Fallen Heroes Fund, got on the phone with Barker. The two spoke for 40 minutes about Barker’s service experiences and the difficulty of raising money in a recession, White said.

Barker, 84, said he was motivated to make the donation because of his naval service and his desire to help people in his retirement. Barker ended his TV career after hosting “The Price is Right” for 35 years as well as “Truth or Consequences,” The Rose Parade, and The Miss USA and Miss Universe Pageants. He made his film debut in “Happy Gilmore.”

Barker has long used his status in the industry to raise awareness about animal rights, and was recently in Canada to draw attention to the plight of elephants.

In this case, he learned about the reputation of the Intrepid Fallen Heroes Fund, and that every penny the fund raises goes directly to projects. The trustees absorb the administrative costs with interest from invested funds.

Having now received $60 million in donations, the Intrepid Fallen Heroes Fund will be able to complete the National Intrepid Center for Excellence, a facility for the research, diagnosis and treatment of traumatic brain injury.

Located next to the new Walter Reed National Military Medical Center, the 72,000-square-foot facility will be the Defense Department’s top spot for studying TBI. In June 2008, the fund broke ground on the building, which is now set to open next year.

More than 300,000 veterans of the Iraq and Afghanistan conflicts suffer from traumatic brain injuries, according to some estimates.

People generally don’t understand TBI, White said, but it is the signature wound of the conflicts, according to the RAND Institute, a nonprofit think tank headquartered in Santa Monica, Calif.